‘You can’t lead from behind’ Chris Kamvosoulis didn’t set out to become part of Nyack’s daily breakfast routine. All he wanted was to catch 40 winks after school. Most days, the 36-year-old from Paramus can be found behind the counter at Nyack Hot Bagels in the Hub shopping center in Central Nyack. Twenty-two years ago, […] 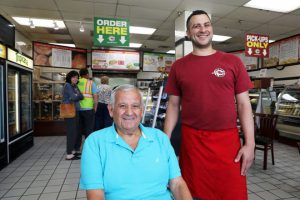 ‘You can’t lead from behind’

Chris Kamvosoulis didn’t set out to become part of Nyack’s daily breakfast routine. All he wanted was to catch 40 winks after school.

Most days, the 36-year-old from Paramus can be found behind the counter at Nyack Hot Bagels in the Hub shopping center in Central Nyack. Twenty-two years ago, he was just a kid going to school in Paramus.

Billy Kamvosoulis has been feeding folks in Bergen and Rockland counties for the better part of 50 years, at diners and luncheonettes and at Nyack Hot Bagels, which he has co-owned since 1995.

“I’d say 80 percent of our customers are regulars,” he said. “It makes you feel good, like you’re doing something right.”

He has been slowed by surgeries and Parkinson’s disease in recent years, and hasn’t been a regular behind the counter in two years. But on a recent morning, when a longtime customer walked in, he remembered her order: “Hazelnut coffee, bagel toasted with butter.”

It’s one thing for your dad to punish you for napping by dragging you to work. It’s another thing to make it a career.

Chris started working part time on weekends during school and full time in the summers. While studying finance at Fairfield University in Connecticut, he’d still make the drive home on weekends to help out behind the counter.

After he had his degree, he kept coming back to the bagel shop, owned by his father and his Uncle Frank, despite his father’s initial advice.

“I told him to not stay in this business too long, because it’s a tough business,” Billy said. “But if he wants to stay, I say ‘OK.'”

All of Billy’s boys have worked in the bagel business. Michael now works for NBC; Tom is an attorney.

“My family wasn’t happy I was here after college,” Chris said. “They were hoping I would do something with my degree and work on Wall Street or something. I couldn’t picture myself going to work in a suit and sitting in an office all day.”

Chris’ mom, Ann, wasn’t wild about his decision, to put it mildly.

“He came home and said: ‘I don’t want to work for corporate America. I want to go manage the bagel store.’ I almost fell on the floor. Not that it’s bad, but I know it’s a hard business to get up at 4 in the morning. I remember you couldn’t even talk because (Billy) needed to sleep and get up at 4 in the morning. And then my son decided to follow his footsteps. But he’s doing great.”

Chris has seen the business grow.

“It was kind of cool, being a part of a family business where, little by little, it’s gotten busier and busier.”

Watching his dad — who is a man of few words, spoken in a raspy voice with a Greek accent — Chris learned everything he needed to know about a business that people depend upon to start their day.

“Be consistent, come to work every day, be on top of everything, make sure the bagels taste the way they’re supposed to,” Chris said. “It’s a big responsibility and you can’t sit back in the office. You can’t lead from behind.”

Over the years, Chris also learned that he had a work dad and a home dad. Work dad was all business, serious; home dad was gentle.

“Every single employee we’ve ever had has been intimidated by him,” Chris said. “No doubt about it. He doesn’t smile. He looks at people with a serious look and they just know. He knows how to manage without opening his mouth. That’s the best kind of manager.”

But then there was that switch to home dad.

It’s not surprising, then, to learn that Chris thinks about his father only when he’s enjoying the job a bit too much.

“Honestly, if I’m having too much fun at work, joking around too much and there’s a line, that’s when I think about him the most. I hear his voice saying ‘You’re not supposed to have fun at work.'”

Chris has three children — Vasilios, 5, Mariana, 4, and Samuel, 6 months — the eldest of whom talks about wanting to go to work with his dad.

The only issue is that, at 5 years old, he still needs a nap.